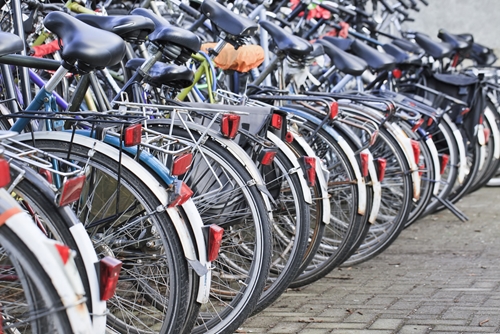 By Myron Promotional Products on May 16, 2014 in Health & Wellness, Special Events & Celebrations

National Bike Month was established in 1956 by the League of American Bicyclists to celebrate people who love to bike and entice those who don’t to join the movement. The benefits of biking are many, from financial to environmental to looking at the neighborhood from a new perspective. Try bringing the two-wheeled spirit to the community with organized biking challenges and competitions. If employees aren’t convinced, hit them with some of these facts from the League about how biking makes the world a little better.

Celebrating National Bike Month in the community
Local businesses can promote National Bike Month as encouragement for members of the community to take advantage of public parks and bike trails. It’s the perfect time to renew or garner interest in biking because the weather is warming up and spending time outside is becoming more attractive. Consider handing out sports bottles with the company logo to customers who arrive on bikes as an incentive to switch transportation modes. It may be a good idea to make or buy an outdoor sign that denotes a bike-friendly business. Additionally, consider installing bike racks out front. For people who seem interested in joining the movement, provide maps of nearby bike-friendly areas so they know exactly where to go.

Schools can add to the community celebration by promoting the merits of biking to school. An assembly on bike transportation should include information about safety measures such as helmets and proper footwear as well as the importance of locking bikes up to avoid theft during the school day. Look into distance challenges that will persuade students to choose bikes over busses and cars. Offer prizes like the Promotional Drawstring Bag or the Promotional Microfiber Backpack for the top riders to use while peddling to school.

For businesses that are located in a central or urban area, organize a day for biking to work. If participation is satisfactory, try making biking to work a monthly occurrence. Declare a goal for what percentage of employees will use bikes for transportation. Whenever the company hits that goal, increase it for the next month. For additional competition, have staff track the number of miles they bike in a month. Keep the data public so people are inspired to ride more and take down whoever is in the lead.