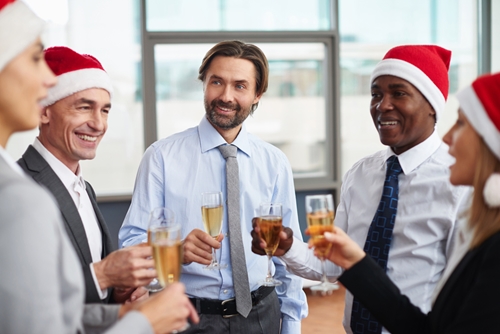 The end of the year can be a stressful time for many small-business owners. Not only do you have to focus on your customers and sales during the holiday shopping rush, but you also need to make sure you have a clear picture of how your next year will play out. Amid all this, it can feel like throwing your employees a holiday party is less of a priority.

But as celebrations from three international Myron offices show, you can throw a fun and festive celebration that doesn’t break the bank and still shows your employees that you really are thankful for all the hard work they do. Get into the spirit of the season and tell your employees through a kicking holiday bash that you’re ready to work together far into the future. Don’t just stick with the tired-and-tested ways of throwing a seasonal soiree, though – take some tips from these three Myron office parties from across the globe.

1. Myron Corp. Headquarters – Maywood, NJ
What better place to kick off the holiday celebrations than Myron’s worldwide headquarters located just outside New York City? These employees are some of the best number-crunchers and salespeople in the country, and December 16 marked the office’s official holiday party where they’d get their due congratulations.

You might think that office parties are only fun if you get out of your employees’ way, but Myron headquarters decided to turn the event into a series of community games. There was the Holiday Trivia Challenge where teams of workers had to coordinate to correctly answer as many questions as they could from a list of 25. There was also a slow-motion game of musical chairs, where employees were given an object to pass around until holiday music stopped playing – the last person standing was declared the winner.

Of course, what’s the point of games at your holiday party if you don’t have anything to give out as rewards? The Maywood headquarters gave winners Myron products from the Mr. Christmas line, like the Mr. Christmas Musical Carousel Horse in Blue.

And to top the whole night off, Myron founders Mike “Myron” and Elaine Adler personally thanked each employee for their work over the past year.

2. HCE Germany – Saarbrücken, Germany
There’s more than one way to skin a cat, so if you’ve thrown the same holiday party year after year, your employees might be in the mood for a more exciting night out. That’s exactly what Myron’s manufacturing affiliate in Germany decided to do, and judging from the pictures, it was a good choice.

In addition to a live DJ and band, employees also enjoyed a festively themed buffet and cocktail bar. In between dancing and mingling with coworkers, employees were also presented with a high-quality wristwatch customized with the company logo. As a personalized touch, Dirk Hess, managing director of ADLER Vertriebs GmbH & Co., penned a thank-you letter that was inserted into each box.

3. HCE Honduras – El Progreso, Honduras
Who says you have to pick between a game-filled night and a dance-heavy outing for your holiday party? Employees at HCE Honduras had the great idea to combine low-key and high-octane get-togethers for a fun and festive celebration.

In addition to a holiday buffet and dancing to live DJs, employees were also entered into a raffle for two high-definition LED television sets, and the top-performing employees in the office were recognized and given awards for their achievements over the past year.

There are dozens of ways you can show your employees you’re grateful for their work this year – just make sure you’ve got the food, the music and the promotional giveaways to make any night one to remember.